During the Pacific War, many Japanese were incarcerated in Australia either as prisoners of war (POW) or as enemy aliens. From small beginnings in the early stages of the war, the total number of POWs reached over 5000 in 1945.  As for civilian internees, about 4300 were interned in Australia; they consisted of residents of Australia, and those who were transferred to Australia from surrounding areas, such as the Dutch East Indies (Indonesia), New Caledonia, and New Zealand. Before the release of the survivors in 1946, over 500 of them had died in Australia. For the POWs, 234 deaths during the Cowra Breakout in August 1944 was the largest number of casualties and they were buried in a plot next to the Australian War Cemetery in Cowra. For internees and other POWs, causes of death were mostly from illness and the dead were buried in nearby cemeteries. In 1942 and 1943, several Japanese planes crashed near Darwin, and their crews’ remains were recovered from the wreckage. They were buried in Berrimah War Cemetery in Darwin.

The issue of Japanese war graves became a matter for concern for both the Australian and Japanese governments in the 1950s. The Japanese Embassy initiated a survey of Japanese graves in 1955 and explored the possibility of repatriation of the remains. In 1959, it was eventually decided to establish a war cemetery in Australia, and subsequently, in September 1962, Cowra was subsequently selected as the location for the cemetery.

The land next to the Australian War Cemetery was chosen for the site and the Japanese government obtained a perpetual lease on it from the Australian government. Shigeru Yura, a Japanese architect who taught at the University of Melbourne, designed the entrance and ceremonial space at the cemetery.  All Japanese war graves were transferred to Cowra from various places in Australia. The cemetery was officially opened on 22 November 1964.

Commemorative ceremonies are held at the cemetery in August every year to honour the memory of those whose graves may be found there. Each grave has a metal plate engraved with the deceased person’s name, date of death and, in some cases, their age at  time of death. With few exceptions, their background stories and the causes of death are largely unknown. This database will hopefully shed some light on the previously untold stories of those who rest in Cowra, far away from home and family. 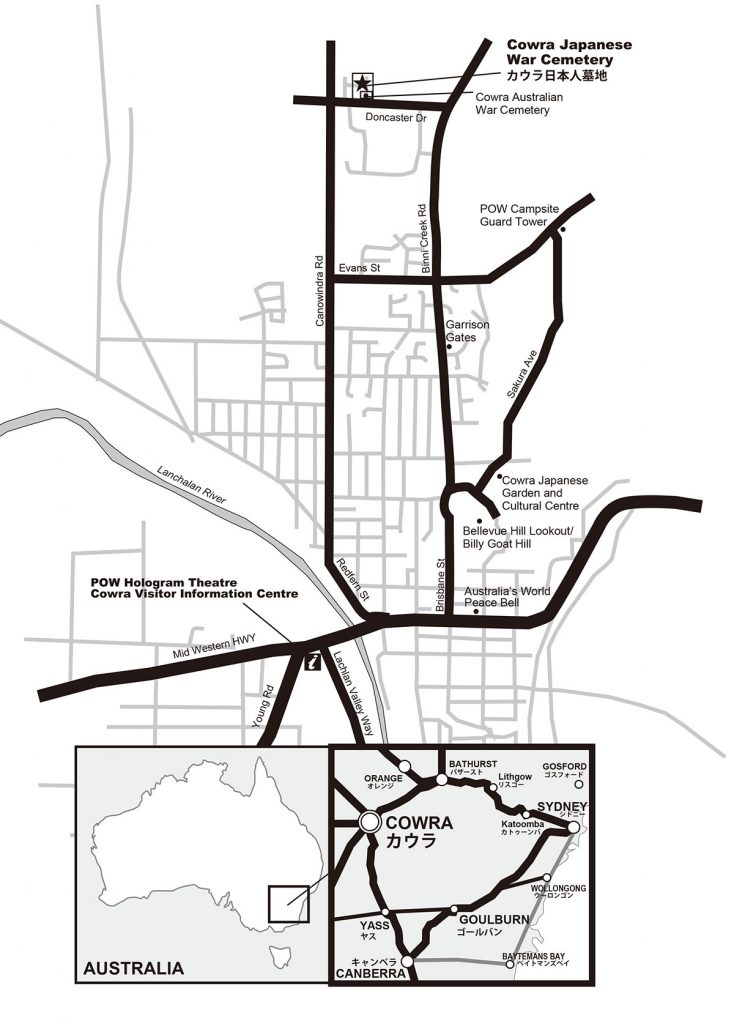